Why do priests wear robes?

Why do priests wear robes? 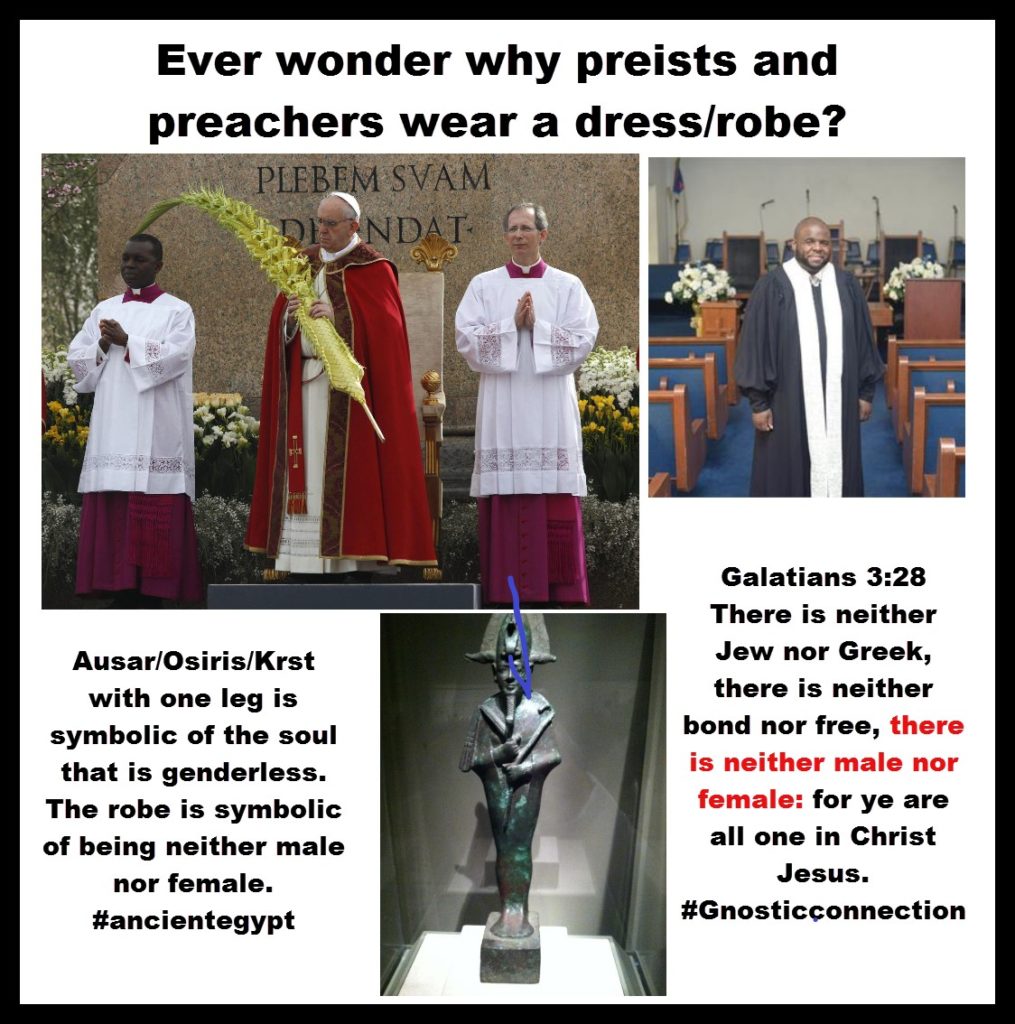 Why do priests wear robes that look like a dress? And why do some Protestant preachers do the same?

The tradition goes back to early Catholicism and many Protestant denominations kept many Catholic traditions. Ancient African Kemet is the source of the robes tradition. The Christians are copying a Kemetic symbolic expression.

Ever wonder why Ausar and Ptah (another Christian connection on that later) is represented symbolically with one leg? One leg in the Kemetic and African symbolic framework is representative of the idea of a soul being genderless. Early Christian fathers got many of their ideas from the Greek Gnostics who studied under the Egyptians. Ancient Egypt was the “Holy land” of the ancient world. 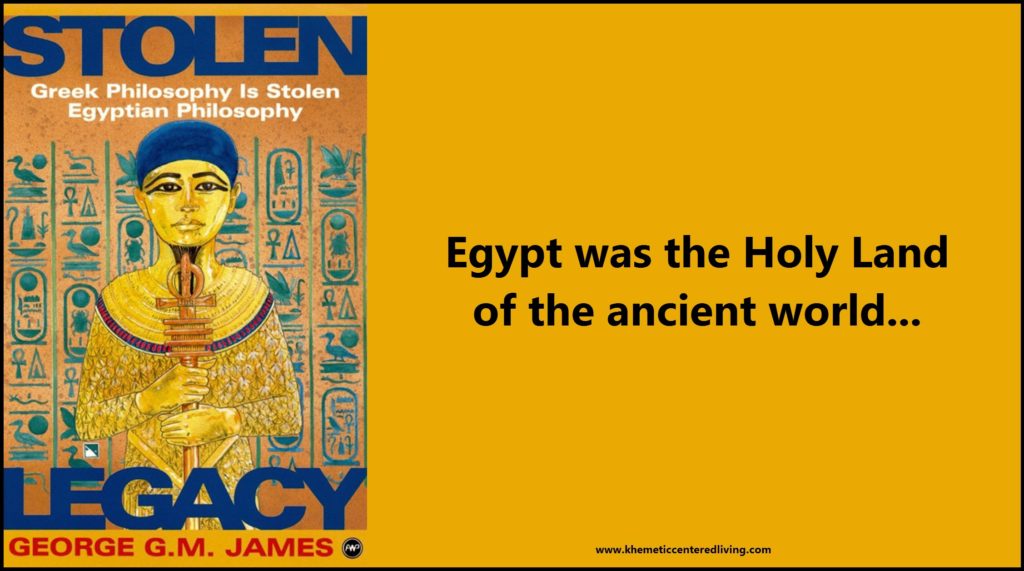 Symbolic primer on Ptah and Ausar

The temple of Ptah is the origin of the Kemetic/Egyptian mythology that Christianity was founded on. Ptah symbolically is a male figure with only his arms and hands-free. Have you ever considered how our reality is formed? No? Well, the ancient Egyptians did and they represented the ideas in a symbolic framework.

LEARN A TON OF KHEMETIC SYMBOLIC CONNECTIONS TO CHRISTIANITY!

Did you know that the pyramid and the cross are symbolic of the formation of reality on one level? Numerology connects myth, symbolism and analogy in the Kemetic system and is truly the foundation of many biblical scriptures that we have used religiously.

In the Egyptian framework, Ptah is part of a trinity of NTR's that created the Universe. Atum is the initial impetus of creation to exist. Amen, is that which is hidden from our knowledge and awareness. That's the same Amen that every Christian ends their prayer with.  And Ptah represents the substance of physical expression or matter. Ptah is the "builder" of physical reality

Ptah and Ausar are trapped or bound by time. Ausar can be symbolic of cycles of nature that are all bound in time and matter. The physical body is the "Tomb" of the soul. While Ptah is part of the universal creative trinity, Ausar is within the earthly realm and the "father" in the trinity with Auset (mother nature) and Heru. 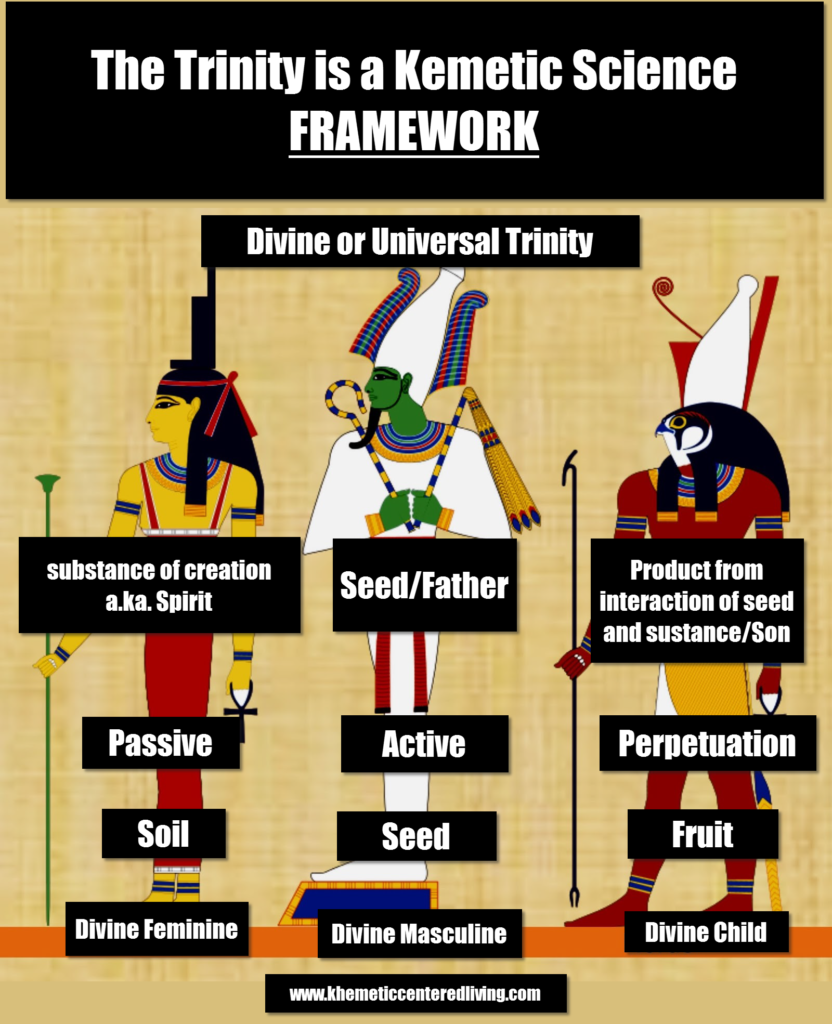 In Christianity, we know this formula as father, son, and holy spirit

These are all principles that have their counterparts outside of the physical. For example, Atum, Iusaas, Iusa were a trinity in pre-dynastic Egypt. They are masculine, feminine, and child. Within the Kemetic framework, the is a seed (active principle), soil (passive principle), and the fruit (representative of the ability to perpetuate). These are all based within a framework that helps you decipher concepts and meanings.

This is just a very basic primer on these ideas and to show the origin of some of the Christian traditions.

Why do Priests wear robes?

Priests wear robes as a symbolic connection to the African symbolic philosophy. Priests and preachers may know the meaning of the "one-legged robe" but have no idea of its origin. Where did the dress looking robe originate? Ancient African symbolism and ideology.

On one level the one leg gives you a clue about the concept of a soul. It is also an idea of unity. In the African tradition, one symbol can mean more in-depth concepts on different levels. My explanation here is one meaning among many others that are represented in the bible by symbolic and metaphorical language.

There are many African connections hidden in the bible under literalism and ignorance. We want our Christian brothers and sisters to awaken. They are curious. Show them the knowledge before colonization. But that means we have to study and research.